First human implantation of the WFMA for intracortical visual prosthesis

Microprobes for Life Science is proud to announce that the WFMA (Wireless Floating Microelectrode Array) has been successfully implanted into a human subject for the first time. The WFMA is a core component of the Intracortical Visual Prosthesis (ICVP) system, which aims to bypass the retina and optic nerves of people with blindness and apply functional stimulation directly to their visual cortex with the goal of exploring the feasibility of artificial vision provided by this approach.

The stimulation is controlled by an external computer that communicates with and powers the implanted WFMAs using a transdermal wireless inductive linkage. The current subject has been implanted with 25 individual WFMAs each of which featuring 16 independently addressable stimulation channels, with all arrays controlled simultaneously by a single external control unit for a total of 400 channels strategically distributed across the unilateral visual cortex. 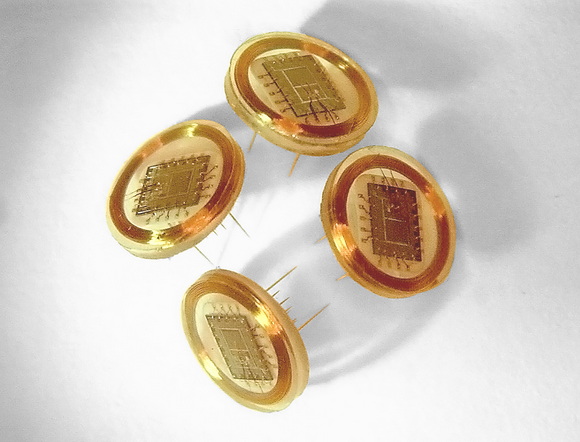 The surgery was performed as part of a Phase 1 Feasibility Study led by Philip R. Troyk, executive director of the Pritzker Institute of Biomedical Science and Engineering at Illinois Institute of Technology. The implantation surgery was performed in mid-February at Rush University Medical Center with no complications. After a brief recovery period, the arrays were activated for the first time in mid-March, and formal functional testing began a week later at the Chicago Lighthouse. While testing and analysis are still in a very early stage, initial post-implantation electrochemical tests confirmed that all 25 WFMAs are functioning as expected.

A 3D rendering of a single WFMA implant alongside a representation of the approximate locations of the 25 arrays implanted in the visual cortex of the human subject.
The WFMA itself is a 16-channel intracortical microelectrode array built on the foundation of a Microprobes for Life Science FMA, only piggybacked by a custom ASIC chip provided by Sigenics, Inc. that provides stimulation control, power, and telemetry functionality to the implant. Being only 5mm in diameter, the WFMA is designed to be implanted in large numbers with each unit floating untethered on the surface of the cortex with activated iridium electrodes penetrating to a custom-determined depth. The combined ICVP system was developed by a multi-institution team led by Dr. Troyk and represents the culmination of nearly three decades of research and development into the approach. “This is an incredibly exciting moment, not just for the field of biomedical engineering, but more importantly for people with blindness and their loved ones around the world,” says Troyk. Since many individuals affected by total blindness do not have intact retina or optic nerves but retain the visual cortex—the area of the brain that allows people to see—an intracortical visual prosthesis may be the only possible advanced visual sensory aid from which they can benefit.

Funding for this study was provided by the National Institutes of Health’s Brain Research through Advancing Innovative Neurotechnologies® (BRAIN) Initiative, the Department of Defense and from private donors. Research reported in this publication was supported by the NIH (BRAIN) Initiative under Award Number UH3NS095557. The content is solely the responsibility of the authors and does not necessarily represent the official views of the National Institutes of Health.